AS usual, I am playing a Radio and Weasel song.

Today it’s for a very, very sad reason and I am playing every single one of their songs that I have in my collections – legal and pirated alike. It is going to take me hours, they have so many!

I even found myself going back to Facebook to post a message to my wall rather than rely on my weekly auto-posts from this blog. 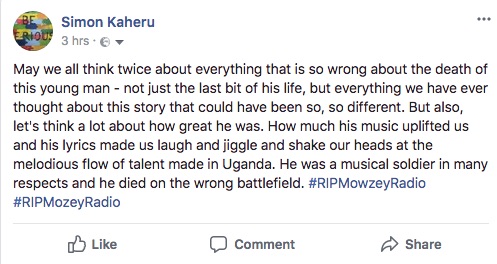 (The wrong things about this death are so obvious I don’t feel like getting into them here and now.)

It’s been more than a decade since these young men burst into our ear drums to get our feet shuffling, hips swaying and mouths twisting in pretence that we could actually say those lyrics the way they did.

It didn’t matter what song they belted out, it HIT. I can almost trace events and people over the past ten or so years by what Moses Radio & Weasel (oba Mowzey & Weasel) song I was listening or dancing to at the time.

And that’s another thing about the Goodlyfe Crew that bugged me and I had made a note to one day fix – their atrocious spellings. It always irked me that they were not at all bothered by the spellings that came up around them – Mose and Moze and Moses or Weasle and Weasel and Wizzo…

I liked them so much I ignored that and always stayed true to the beat.

I was living and working briefly in Germany when they dropped Zuena while that other Nigerian guy had a similar sounding tune rolling at the same time, but my choice between the two was quite simple to make because of phrases like, “Ku lukalala abakwegomba, Zuena ndi namba emu; ku counter y’omutima gwange gw’ali mu namba emu! I miss you, you, you should get some time ne twogerangamu. Lin’ekkomera bwonsibidde temuli kalungi n’akamu!”

To this day, I have Bread and Butter on ALL my gym and jogging playlists – and I thank those boys for that melody buli daily.

Shortly after that Radio used the word, “dinisa” and my stomach developed butterflies of nostalgia. People don’t talk like that any more!

Speaking of tuning, did you hear Dudu and those bits that will hands-down melt the hardest of hearts?

I hear, “Come let’s go dancing in the rain; my Dudu! Dudu, your like the air that I breathe! Dudu, you’re like water, Dudu you’re my life…!”

Then: “…Something about your face that can never be forgotten…you de make me feel defeated!”

Get Amaaso and try it out on your love interest then report back here to tell me.

Try singing that while dancing and there is no way the rhythm will elude you, walahi!

Even in real life he was cheeky, and funny – the few times I interacted with him. I only saw him once in the daylight, so you can imagine how merry everyone was (in my experience) around him.

In every one of their songs with romantic lyrics he had the fun, naughty and catchy lines and outshone his partner but there was never a hint of bad blood all through the years.

It certainly helped that he had this voice that conveyed the electricity flowing through his wire thin body, opposite Weasel’s gruff voice and buff-ish look. The name Radio made absolute sense when he started singing like that.

If you’ve ever made a dance mixtape or played a party you know full well the impact of punching in a Radio & Weasel intro to make the dancefloor know they are coming up.

“People are you ready?” as in Magnetic is enough to make people lose their minds in agreement – any day, any where…except today. We were not ready for Moze Radio to go like this.

The Goodlyfe duo had it going for them, wabula. Uganda Telecom used them for just Talk and Talk and people thought MTN was finished!

“They will talk but they can’t do the walk. Like Michael Jackson I’m a master of my moonwalk…” he sang, reminding me of how sad we felt when MJ went.

Now he’s gone to the Almighty, joining his brother AK47, with whom they did Jah Guide…

At some point I even hoped they would get a national medal of sorts for putting Uganda on a very good map – https://skaheru.com/2013/07/07/radio-weasel-jotham-musinguzi-you-are-true-ugandan-heroes/

Their reach went far and wide – they ruled Kenyan dancefloors with all their songs even before Amani teamed up with them on Kiboko Changu; I danced to them in Zambia on many a night even before they had met General Ozzy to redo Potential.

Speaking of which, that boy had Potential that actualised itself but wasn’t fully capitalised by the time he left. Moze Radio should have gone on making even old men such as myself aspire to insert Luga-flow into our normal conversations, pull dance strokes we can’t explain to people who know us well, and shake our heads at the wit and cheek in his lyrics.

In Ability he sung, “Olina ability; kozesa opportunity! ‘coz opportunity comes once in a lifetime!”

He certainly had many opportunities but they’ve all gone because of a Kiduula – another catchy tune with some eerily prophetic lyrics that he could have heeded in life to avoid this painful departure.

And it’s really painful because we all knew that there was more coming from the duo – surprisingly catchy tunes that don’t sound too different from the last ones but that are quite distinct thanks to Producer Washington (who was reportedly with him on that fateful night) and the entire Swangz Avenue crew.

Every year that they released something new it was refreshing – Nakudata to Ntunga through to Bikoola. I honestly assumed they would be doing it Neera, n’eera and it’s painful to realise that they aren’t.

The year of Bwondekawo, we we laughed and applauded and danced equally in amazement that they had come up with that tune with that exact phraseology – and the next time I saw it was at the junction of Kaguta Road leading to Rushere: “Mzee Bwogeza notulekawo, tujja kwekola ekintu!”