A FEW months ago I was at an event in the Parliament of Uganda during which warnings were issued against participants making their way into the August House without first clothing themselves smartly in ‘official’ attire.

Official attire, according to the honourable gentleman who reminded everyone of the rules of the House, included a necktie for men. The Parliamentary Rules of Procedure, however, do not actually require us to wear neckties but people get kicked out every day over this lack of ‘smartness’.

Just to be clear, the Dress Code listed under Section 73 of Part XII of the Parliamentary Rules reads as follows: 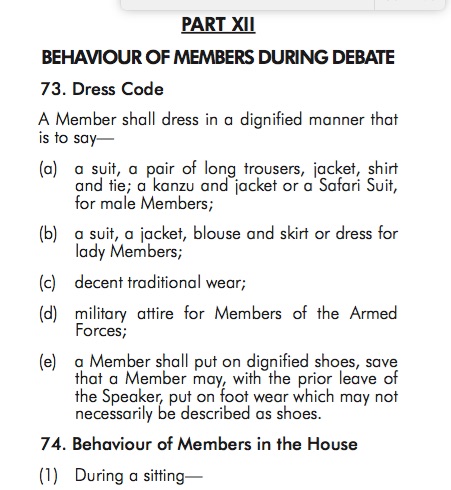 The incident returned to me last week because of the number of people in Kampala who were unlucky enough to be robed in what we call ‘Graduation Gowns’ on the days when it didn’t actually rain or get so cold for the black robes to be worn with comfort. I suspect that besides the people who actually sold or hired the robes, the other trades that did well because of the dress code on Graduation Day are the vendors of anti-perspirants and bathing soaps.

I once had to wear a ‘Graduation Gown’ or Academic Robe myself, as a Graduand, and certainly didn’t find it comfortable at all but had to follow the ‘rules’ until I got out of the University gates sans proud parents. My gown festered thereafter in an old suitcase with my mortar until I later needed to play at something for a fancy dress party.
Even back then I couldn’t find anyone to explain to me why we dressed up this way. The explanation for the necktie is equally wanting, as most people will tell you that it makes men “look smart”.

Nelson Mandela, may his soul Rest In Peace, helped break that stereotype by going about in his colourfully styled formal shirts that we eventually picked up, and looking smarter than most besuited politicians. Many West Africans also break from this medieval European concept of smartness and instead go about in their formal robes most of us call ‘Agbada’.

Reading up on the history of the necktie is irritating. Most accounts can’t explain why we wear them but point to some Croatian mercenaries hired in the France of Louis XIII (in the 17th Century!) who wore a piece of cloth round their necks for some unclear reason. Maybe they generally had hideous Adam’s Apples and took to hiding them with this thing that King Louis XIII named ‘La Cravate’.

I have always suspected that the reason for the damn thing is to keep those men in Europe warm, along with their three-piece suits, since their climate is generally frozen or dripping wet and cold. Or, maybe, the Croatians needed to hide protruding Adams Apples.

Apart from the people in the Rwenzoris, Kabale and Kisoro, therefore, the rest of us should by now have another mode of ‘smartness’ that would be more comfortable and logical – like a nice, formal shirt or tunic like the Kanzu (provided for in the Parliamentary Rules).

We don’t. Instead, we must wear neck ties and sweat in our offices, courts of law, Parliament, and other places where we should be encouraging brains to work smartly with minimal discomfort and distraction so we can apply them to our numerous problems and development needs.

It is those same rules that had Graduands spending sums of money ranging from Ushs75,000 to even Ushs300,000, by some accounts, on ‘Graduation Gowns’. Most universities demand that Graduates attending the official ceremonies be robed, mostly because they need to be identified easily and for the ceremony to be presented in proper pomp.

I did think, during my Graduation ceremony, that the money spent on my dressing could have been better spent on renting a small abode closer to my proposed place of work (or just out of the parents’ eyes so I could continue with the life of a misguided young man), but rules were rules and I had to be ‘smart’.

Still, I did hope back then that one day we would have Graduands robed in gowns lighter and more suitable for our weather. The history of that gown, according to some sources on the internet, starts in the medieval universities of Europe when education was conducted by the churches and so the dressing was adopted from the clerics then.

Because the buildings they operated in were mostly large and unheated, one had to wear those thick robes in order to keep warm. That was smart of them.

More to that, though, was the need to separate the students from ordinary people by way of dress code – hence the term ‘Town and Gown‘. The townspeople wore their ordinary clothing, while the students wore gowns – which separation often led to clashes between the two groups as the students usually acted arrogantly over the poorly educated, lowly citizens.

Our universities actually do have ordinary Academic Gowns but students don’t always wear them – they only show up during protests and other small events, and when they do they are of the light variety.

Where ceremonies take place out in the open tropical air, therefore, the thick gowns should be found as inappropriate as they feel worn on top of heavy cotton, double-lined suits all buttoned up over neckties.

One day, hopefully, some scholars of history, fashion design, economics, and common sense might find it in themselves to get together and do a more serious thesis on this. They will present a dissertation that leads to a revolution in our institutions of higher learning so that our Academic and Graduation Gowns are more suitable to our circumstances.

The smart people that take that assignment up will probably earn immediate employment in our Private Sector Foundation, Investment Authority, Export Promotion Board, Ministries of Agriculture (for putting local cotton to use), Trade & Industry (it should be obvious why), Gender & Culture (for localising a foreign concept) and Finance (again – obvious) or in the private sector itself.

They will deserve such recognition and postings because the definition of ‘smart‘ to do with “having or showing quick-witted intelligence” is much more important than the one about “well-dressed, neat and stylish”. Or, in my humble opinion, it should be.