A few weeks ago I was getting rid of email entropy – that condition that inexplicably leads to the accumulation of material such as happens in hand bags, drawers, glove boxes and in this case, email inboxes.
I was surprised to find an email from one Cathy Kreutter, making comments about an article I had written about two years ago. Horrified that her email had gone unattended, I worked out that she had sent it at a time I was dealing with a personal tragedy.
Quickly, I belated corrected the situation and was so happy that she forgave me that I offered to buy her coffee some time if she was still in Uganda (her surname suggested that she wasn’t Ugandan), and did so promptly to make up for the two-year gap.
Over that coffee (tea and water, actually) my mind exploded in various ways.
First of all, to the content of her email: she was responding to an article because she needed to re-inforce something I had said about how Ugandans CAN deliver high quality products when we put our minds to it.
Cathy Kreutter is an author. Right now she is not ready to write her full story, and has chosen to write children’s books but the quality of those books is such that she has won international recognition for both her content AND the production.
By occupation, she is a Librarian, so her association with books is not to be taken lightly. Paraphrasing a lot of what she said, I worked out that when she decided to write her first book she was irritated that everyone thought she had to send it off to Dubai or India and further afield in order to get a serious job done.
Like a good Ugandan would, she chose to write her book with the determination that it would be stitched and bound in Uganda by Ugandans, and then sold anywhere in the world as her evidence that we, over here in the Pearl of Africa, can do just as well as anybody else in the rest of the world.
Painstakingly, she cajoled the people in the printing section of the ambitious Vision Group to be even more ambitious and aim for the very best work possible – and even if they did balk at it in the beginning, they eventually rallied round and – voila!
“I Know An Old Mzee Who Swallowed A Fly” – a book written by a Ugandan, illustrated by Ugandans, produced by Ugandans and published by Ugandans went ahead and won a Moonbeam Award!
This was no mean feat. The Moonbeam Children’s Book Awards go to the very best books found “appropriate for the North American market”. The book is good enough to feature properly (at full rates) on Amazon.com, which platform will reject poor products or price them at massive discounts.
I shot an email over to Jim Barnes, the Editor and Awards Director of the Jenkins Group, which is behind the Moonbeam Awards, and he said this was the first from Uganda.
“That may be our only Ugandan entry. We get some from South Africa, but that’s about it,” he told me.

So Cathy Kreutter had put Uganda on that map through her sheer insistence that it could be done – and kudos to the guys at Vision Group for working so hard to achieve that.
Now, that wasn’t all that tickled me when I met her. This lady, it turned out, has been in Uganda since 1981 and is now a Ugandan citizen. Her book, should she write it, will be a captivating read even if she doesn’t believe so right now.
Her story involves so many near misses that it could even be turned into a movie; yet in spite of those near misses her and her husband still came and lived in Uganda through the difficult days and are now localised investors (not missionaries) in the fabric of the country.
I could have been skeptical about this but the day after I met her I went out to the Katosi fishing village for an event with a firm called RTI International, which was doing a very low key handover ceremony of a school building. As I took photos of the excited schoolchildren, one of them caught my eye because his t-shirt bore the words, “CornerStone Development”.
I had seen that written on the back of Cathy’s book, and she had told me it was a foundation her husband Tim was heavily involved in (put modestly).
But they had nothing going on in Katosi – which meant that the child wearing that t-shirt was one of those far-reaching effects of intervention that proves it is a success – and THAT is what the proceeds from her book go to fund. Not the t-shirts, but the schools that Cornerstone builds – in Rwanda, Tanzania and South Sudan as well.
Well there is more, apparently, as we will discover this weekend when we all flock to the Protea Hotel to launch her next book – “Tendo’s Wish”. 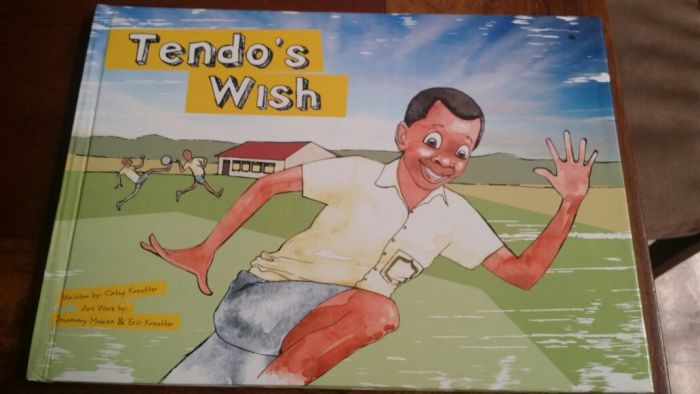 The stories about the books themselves are different, and need more column space. This weekend, though, we will applaud this American Ugandan who, like her life story, took an American folk tale and Ugandanised it to great acclaim, putting the two countries at par on that level.